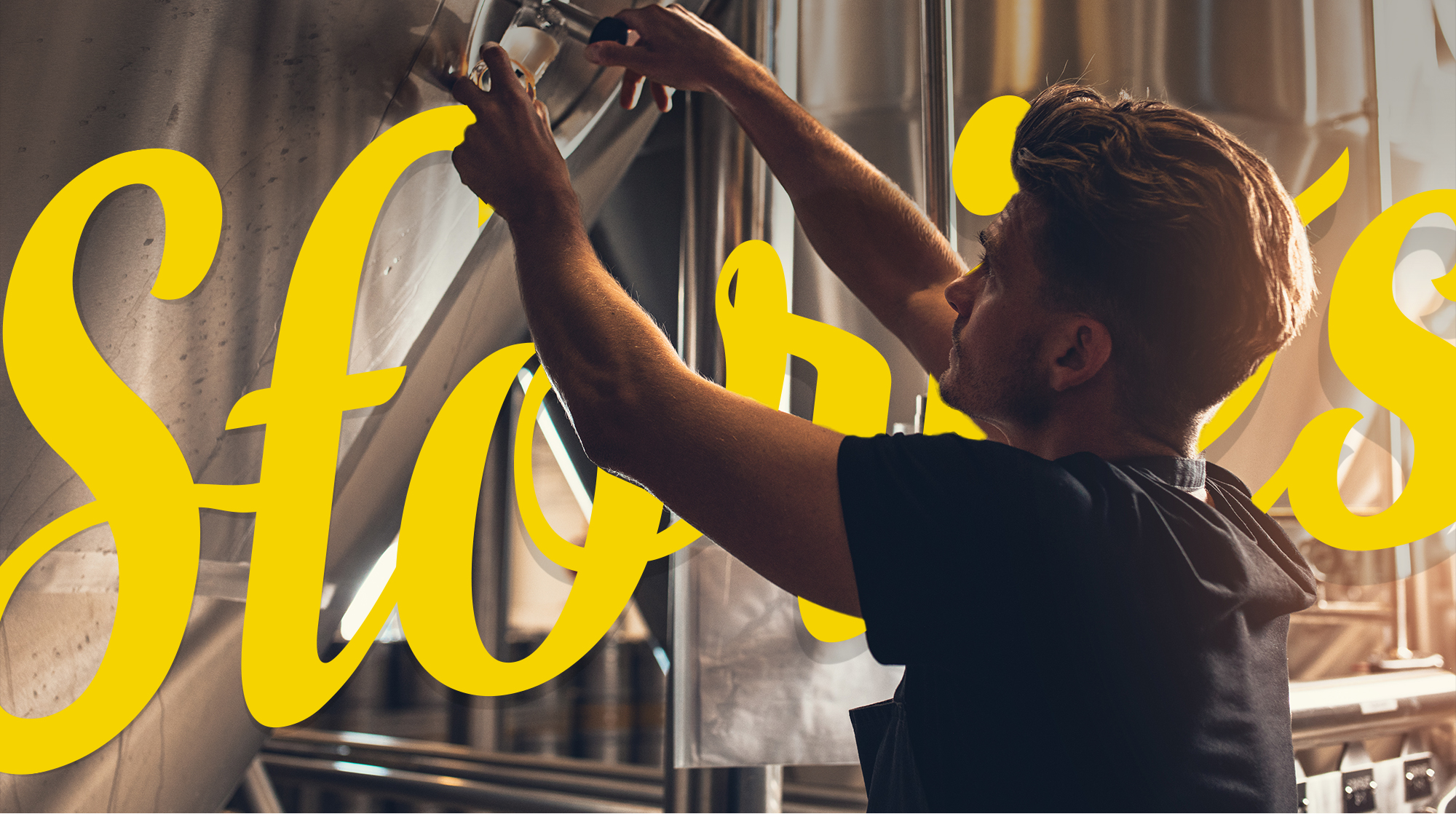 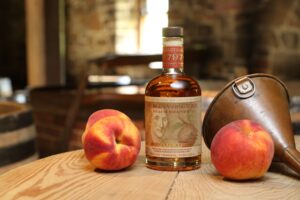 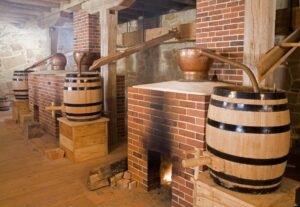 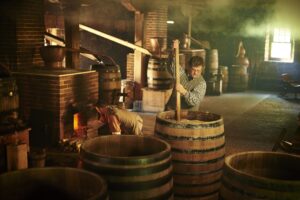 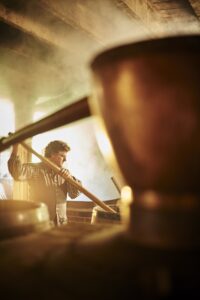 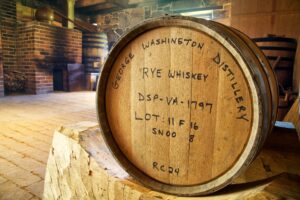 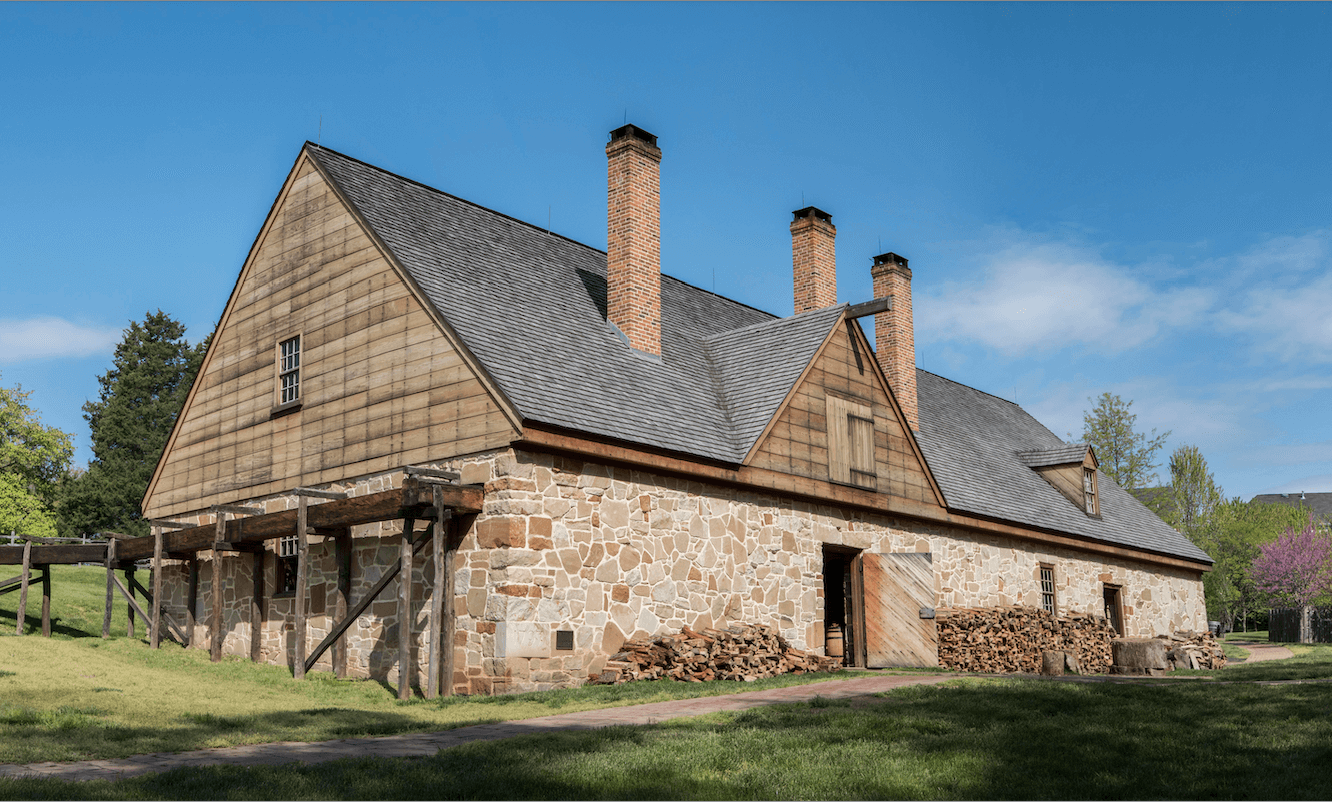 George Washington began commercial distilling in 1797 at the urging of his Scottish farm manager, James Anderson, who had experience distilling grain in Scotland and Virginia. He successfully petitioned George Washington that Mount Vernon’s crops, combined with the large merchant gristmill and the abundant water supply, would make the distillery a profitable venture. In February 1797 the cooperage at the mill was converted for distilling, and two stills began operating.

By the end of the summer, the makeshift distillery was so successful that Anderson lobbied George Washington to increase the number of stills. Construction began in October of 1797 on a stone house large enough to accommodate five copper pot stills. The foundation consisted of large river rocks brought from the Falls of the Potomac, and the walls were made of sandstone quarried from Aquia Creek. Anderson’s son, John, managed the production and was assisted by six enslaved African-Americans named Hanson, Peter, Nat, Daniel, James, and Timothy.

The enlarged distillery was working by the spring of 1798. Its success was immediate, and George Washington commented in a letter the following year to his nephew:

Two hundred gallons of Whiskey will be ready this day for your call, and the sooner it is taken the better, as the demand for this article (in these parts) is brisk…. (George Washington, October 1799)

That George Washington was willing to commit to distilling by building such a large structure is evidence of his desire to pursue the most innovative and creative farming practices of the day. Despite having no prior experience in distilling, he quickly became acquainted with the process. In 1798, George Washington noted that

Rye chiefly, and Indian Corn in a certain proportion, compose the materials from which the Whiskey is made…. (George Washington, February 1798)

The finished product was contained in barrels manufactured at the site and marketed to local farmers in Alexandria, in addition to supplying the needs of the Mount Vernon plantation. The distillery created a great quantity of waste, and this slop was fed to over 150 hogs and cattle penned at the site.

In 1799 the distillery produced 11,000 gallons of whiskey, making it one of the largest distilleries in the nation and one of Washington’s most profitable endeavors. The death of George Washington in December 1799 halted the brief success of the distillery. Within a decade the building fell into disrepair as many of the building’s stones were taken away to use in local construction projects.

In 1932 the Commonwealth of Virginia purchased the property and reconstructed the gristmill and miller’s cottage in addition to outlining the distillery. It was opened as a state park and remained as such until 1995 when the Mount Vernon Ladies’ Association agreed to restore the gristmill and research the area. Two years later, archaeologists at Mount Vernon surveyed the land and located the foundation of the distillery.

In 1999, Mount Vernon archaeologists began their archaeological investigation, a project which accelerated in 2001 with the generous donation from the Distilled Spirits Council of the United States (DISCUS). The grant from DISCUS allowed Mount Vernon to begin a five-year program of archaeological and documentary research, with the goal of reconstructing and interpreting Washington’s distillery.

Since opening to the public in 2007, the Distillery has welcomed half a million visitors to the site. Mount Vernon has sold more than 67,000 bottles of product including regular runs of unaged whiskey, two and four-year aged whiskey, and occasional specialty runs of peach brandy, apple brandy, and rum. Sales have raised more than $6.7 million in revenue benefiting the ongoing preservation and restoration of Mount Vernon and its educational programs.