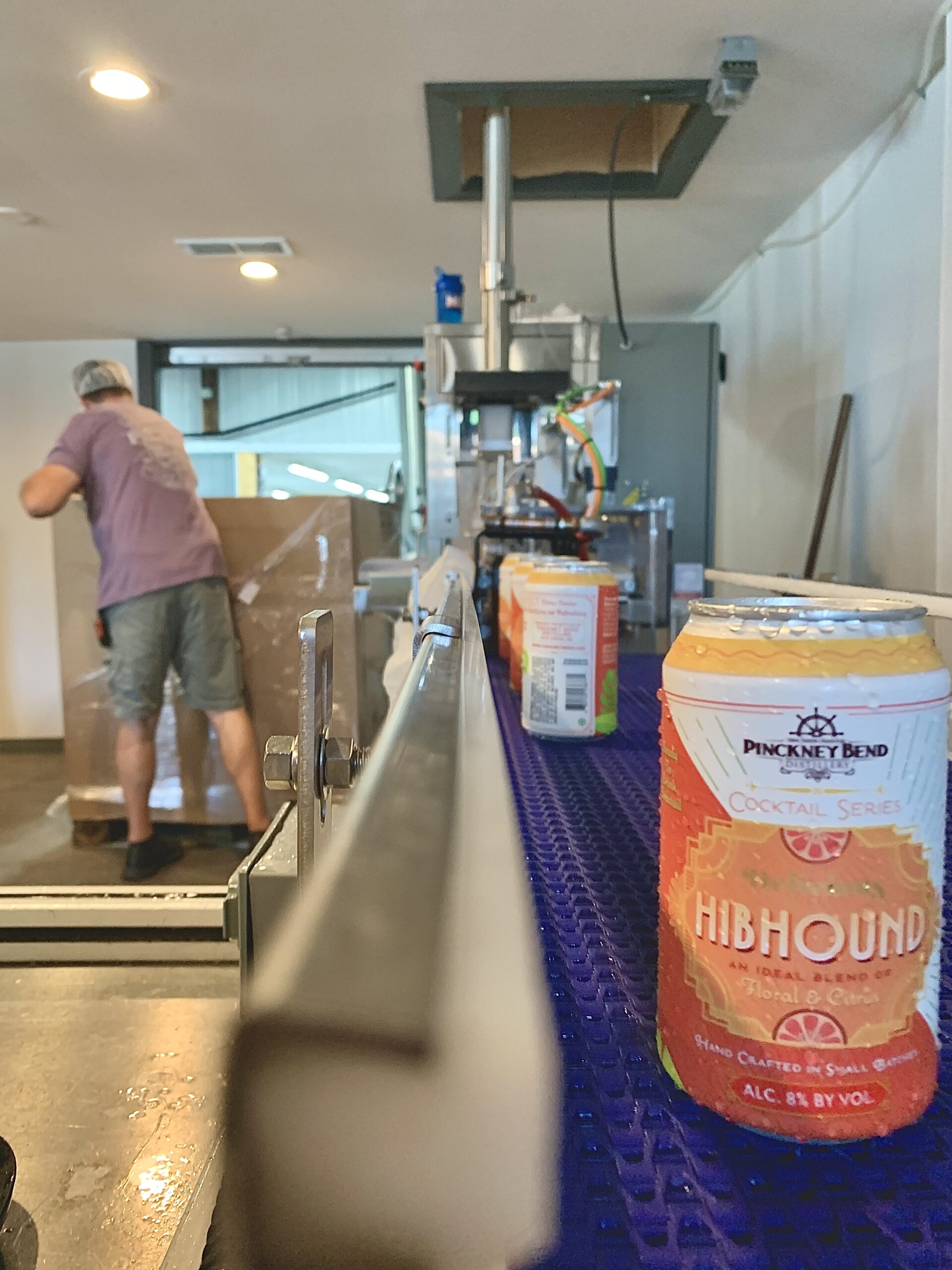 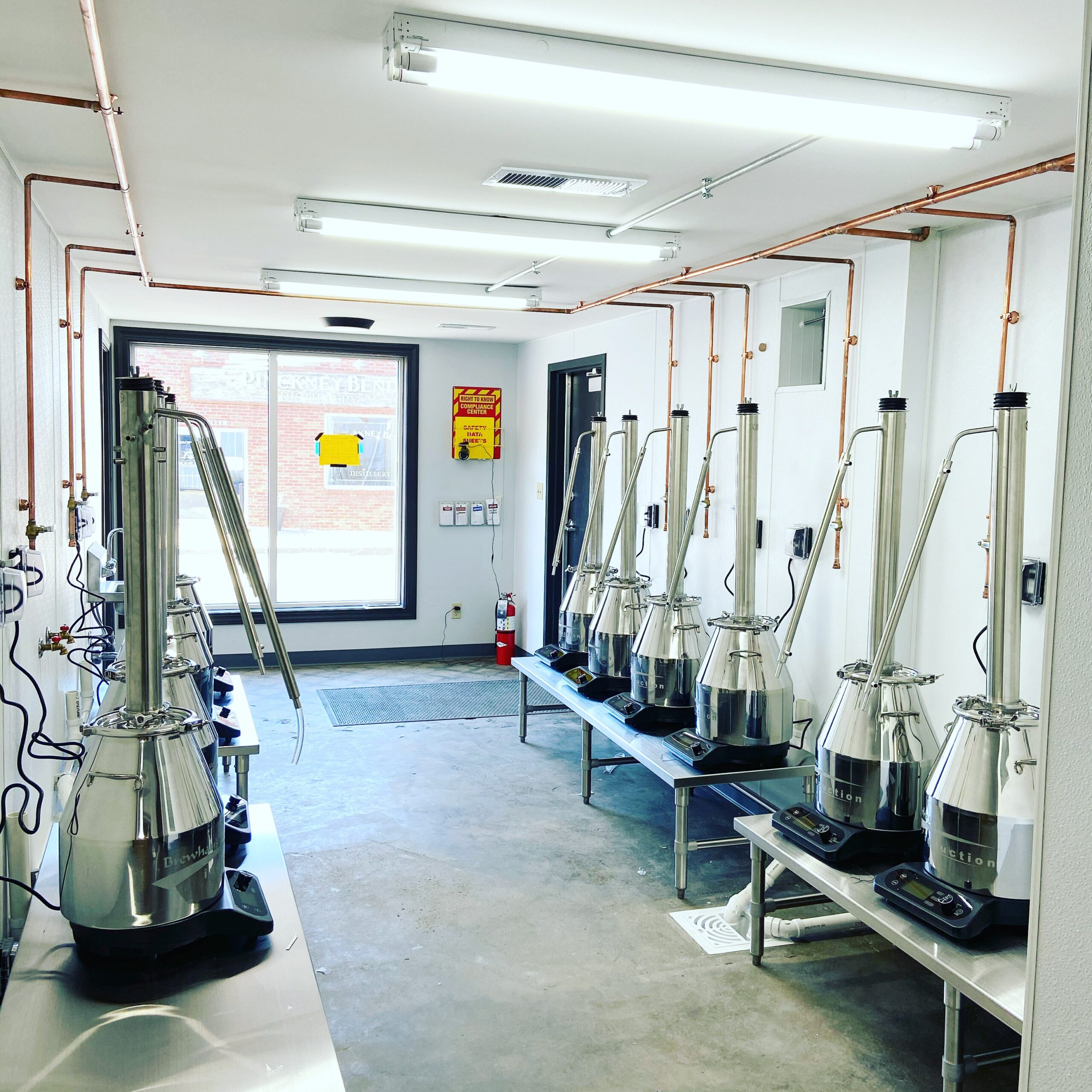 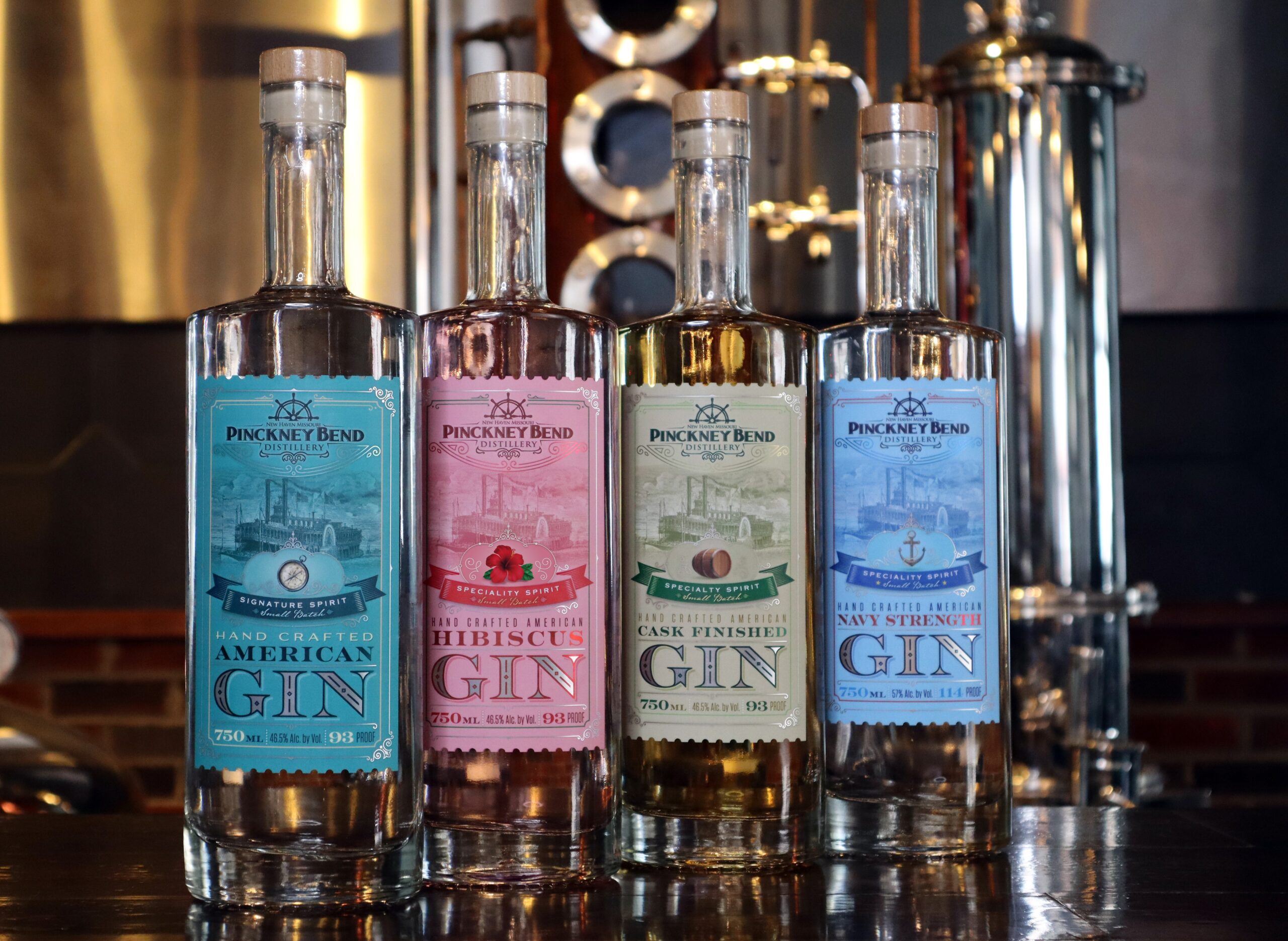 Three friends form varied backgrounds shared a passion for brewing and a spirit for entrepreneurship. Through these friends, another generation of friends, bonded from years of hospitality work, joined in the vision. Long friendships and shared passions are at the heart of our distillery. Our focus was not to built the perfect distillery, but the perfect place for each other. Pinckney Bend launched with a single product, American Gin. The historic nature of our town, the proximity to the Missouri River made it clear we had a mission larger than we thought, but our goal has always remained simple; produce premium-quality spirits by passionate people, worthy of their heritage, one small batch at a time. Cheers to new friends! 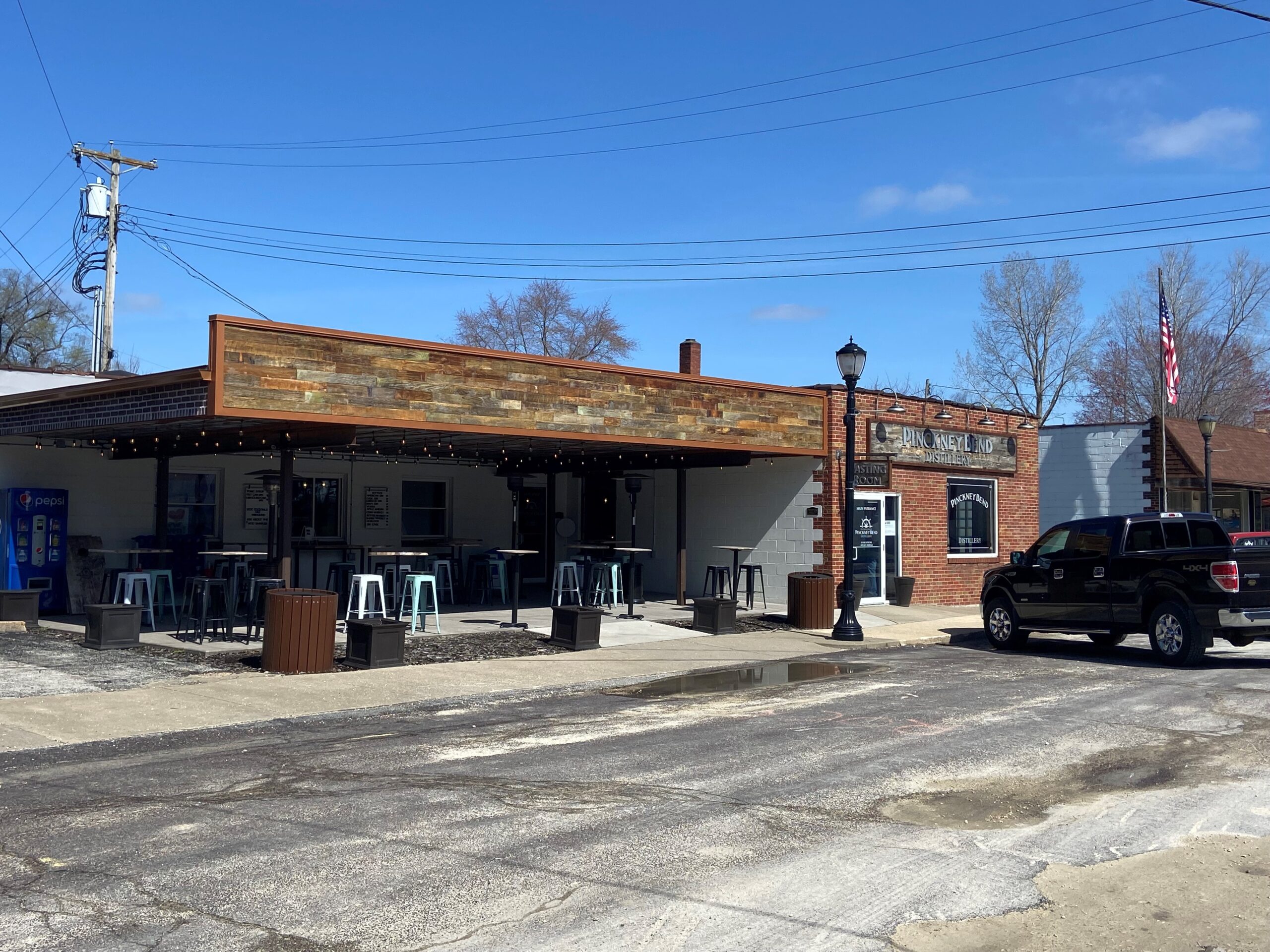 Three friends, a brew club and an idea
The historic nature of our town, along with the Missouri River’s proximity to our distillery’s front door, made it clear that we had a mission larger than just making and selling whiskey. We strive to celebrate the history and traditions of those who came before us.

Brew Club Beginnings
Pinckney was founded by three long time beer-brewing buddies. Jerry, Tom & Ralph met in 1990 at the New Haven Brew Club. For years the group dreamed of one day opening a craft brewery, but day jobs needed to be kept. Jerry was an airline pilot, Tom owned a printing services company and Ralph owned a small creative services agency. Time continued to pass – as did their love of beer.

A Seed is Planted
The turning point came when, for fun, Tom decided to distill a batch of beer brewed from peat-smoking barley. Tom’s family had an old prohibition-era farm still. After a little aging in a jar of oak chips, the result was a surprisingly fair approximation of a cheap scotch. The seed was planted.

Encouraging News
Entering retirement and looking to turn their long time hobby into something more, the trio were encouraged by news stories about a new business called “craft” distilling. The group got serious about researching what it would take to get started. Tom joined the newly formed American Disitlling Institute (ADI), Ralph attended a workshop in Chicago and Jerry started the long and complicate application process. After a year of research and paperwork, Artisan Spirits LLC, dba PInckney Bend Distillery, received a Distilled Spirits Permit from the Tax and Trade Bureau in October of 2011.

Fresh eyes and product development
The economics of establishing a small distillery with limited resources became clear. As did the long days and many things to do. Product development started with clear spirits. We knew there had to be a better way to make gin. It was soon obvious that more help was needed. Jerry asked his son Keith if he knew anyone who would want to work bad hours with no pay or the exchange of getting to help. Shockingly, he knew three such people. Cat, JT and Tara were soon on board to help label, cork, clean and do just about anything needed. All while working their own full-time jobs. A second generation was born.Launch into the future
Pinckney Bend launched with a single product: Pinckney Bend American Gin. Ralph began selling it from the back of his van in late November 2011. In April of 2012, that gin was awarded a Gold Medal at the San Francisco World Spirits Competition, and by June of that year the distillery had secured a Missouri distributor. The Tasting Room was launched in August 2013 with Vodka and Corn Whiskey following. Years passed, awards racked up, new products released and the family grew. We look forward to moving into the future with those same humble beginnings and passion.

In-Depth History of Pinckney Bend/New haven:
Remembering a Place Lost to an Unpredictable River
From a steamboat graveyard to a Lewis & Clark whiskey stop, our history is long and varied. Small river towns aren’t new around here, but it was clear that Pinckney’s story, now New Haven, was something to be celebrated and remembered.

Steamboat Graveyard
Pinckney Bend was a navigational hazard well-known to generations of Missouri River boatmen. Located at mile marker 83 above St. Louis, it is the site of a once-thriving town long since disappeared, and a stretch of river where at least five 19th century steamboats were wrecked, including the famous side-wheeler Spread Eagle.

Lewis & Clark Whiskey Stop
Returning from their Voyage of Discovery, on the afternoon of September 20, 1806, Lewis and Clark rowed past what would soon be named Pinckney Bend. The group over-nighted just downriver at small French village near the mouth of St. John’s Creek. Clark noted in his journal,
“We purchased of a Citizen two gallons of Whiskey for our party for which we were obliged to give Eight dollars in Cash, an imposition on the part of the Citizen.”
Sergeant Ordway noted the exorbitant price in his journal as well. Both men chafed at the cost, but there were no complaints about the whiskey’s quality. This is the first historic reference to strong spirits at our bend in the river.

Town Springs Up
Despite its vulnerable location within the Missouri River’s vast flood plain, in 1818 the soon-to-be-platted town of Pinckney was designated Seat of Justice for the newly formed Montgomery County. The town was laid out one year later, a few log cabins were built and a store, which also served as post office. The first public building, a jail, was also built in 1820, along with the first frame house in the county which also served as the courthouse. The next building erected was a mill, completed by two Germans named Weaver and Duvil. Where there is grain and the means to process it, whiskey is never far behind.

Early settlers in the river bottoms around Pinckney were an interesting lot, with Daniel Boone and his extended family being the most prominent. Several nearby farmers were veterans of the War of 1812, and two were descendent from signers of the Declaration of Independence. The famous steamboat Captain William R. Massie also grew up on Massie’s Creek near Pinckney. It is not generally known that Charles Younger, grandfather to the notorious Younger Brothers Gang, which included Jesse James, was an early settler near Pinckney. Incidentally, Corporal John Coulter, perhaps the most famous and colorful member of the Lewis & Clark Expedition and arguably one of the group’s hardiest partiers (he was brought up on charges twice) eventually settled in the New Haven area, just across the river from Pinckney. He lived there until his death in 1813, and is believed buried only a few miles from the distillery.

Then It Was Gone
Just when everything was going so well, the promise that was Pinckney ended with a major flood in the spring of 1824. But for a brief period, from 1818 until 1824, Pinckney Bend was the last town on the upriver journey westward.

Distilled Spirits Return
Today its namesake, the Pinckney Bend Distillery in New Haven, Missouri, celebrates the legend and lore of this vanished town. The river has changed course since those early days, but standing on the levee not far from the distillery’s front door and looking westward, you can almost see where the town of Pinckney once stood.

Our goal is simple; to produce premium quality, hand-crafted spirits worthy of their heritage, one small batch at a time.